What does an Animator do? 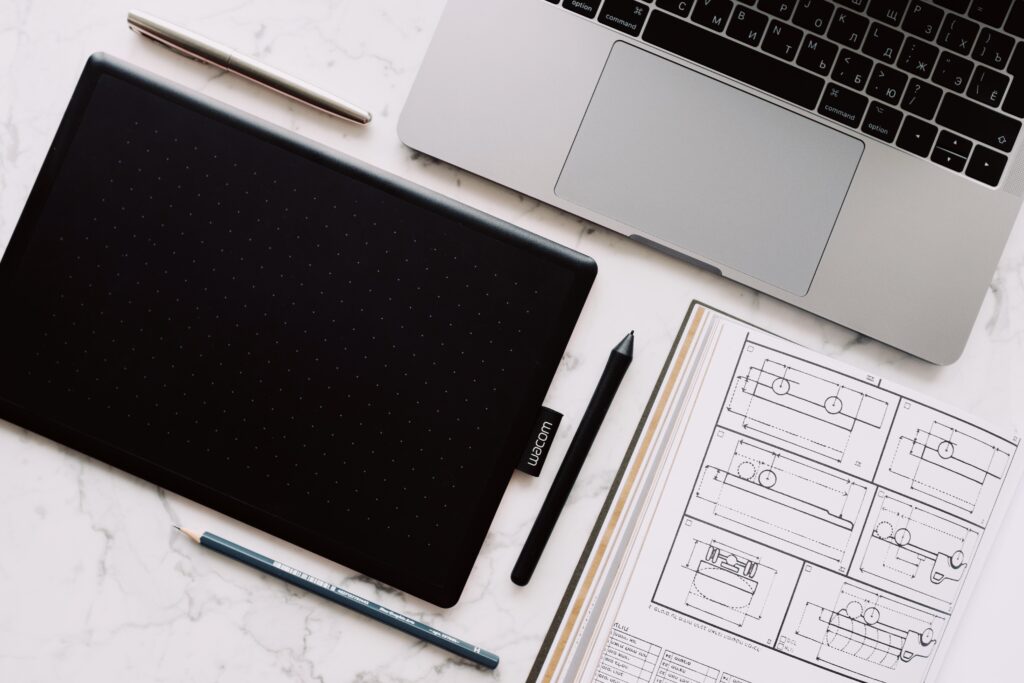 Photo by ready made from Pexels

In recent edition of What does a … do? we looked into the depths of VFX to understand how the sector is broken down. This time we dive even deeper into the topic deconstructing Animation and understanding the duties and responsibilities that come with the role.

Focussing on motion, it is the animator’s job to determine the realistic movement of CG (computer generated) elements such as creatures, objects and effects within a scene.

In the typical day to day of an animator, you will find them:

Where will you find animation?

Working in animation gives you the opportunity to work across all forms of media complimenting countless sectors, such as: Film, TV, Advertising, Gaming, VR/AR simulations, Theme parks, Art exhibits, Architectural visualisation, Science, Engineering, Forensics, Medicine… And the list goes on!

With VFX and 3D graphics being so popular, companies with diverse backgrounds are finding new ways for it to benefit them. Because there are so many directions within animation alone, a lot of animators decide to choose one industry and adapt their skills set to it.

For example, working in film you might decide to focus on character animation or flame art whereas in gaming you would focus on real-time rendering.

This is a perfect case as to why it’s important to have a sense of direction when working in CG. It allows you to align your skill set to the type of work you want to be doing which is important to employers.

What does it take to be an animator?

Back in the 1930’s Walt Disney arranged for his animators to have drawing classes which studied new ways of animating objects to be more lifelike. In suit of Disney’s animation style, they focused on the movements of human figures and various animals through playing live action clips over and over to understand the details of every action.

It’s actually quite common for animators to have a passion for acting, or come from a stage school/university background as they are able transition this knowledge into animation.

Back in 1906, “Humorous Phases of Funny Faces” was the first animated film ever to be printed on standard motion picture film – far before the likes of any fancy software’s like Maya, Houdini or 3DS max.

Executed using the traditional animation technique this short film laid the foundations for future animation and then over time animators across the industry devised a set of procedures and principles that continue to govern the industry standard.

Traditional animation is when pictures are drawn and photographed frame by frame with each drawing slightly changing to create the illusion of movement.

Stop motion animation is when real life objects (i.e. models) are physically manipulated frame by frame to create the illusion of movement.

2D animation being the manipulation of 2D vector graphics which uses the techniques of traditional animation, onion skinning, interpolated morphing and rotoscoping.

3D animation on the other hand focuses on manipulating 3D rigged models (created by modelling artists) creating the illusion of movement.

Squash and stretch (also known as S&S) is in many ways seen as the most important of the 12 principles. It works on the basis that of applying contrasting change to a shape, it goes from a squash pose to a stretch pose. This is a popular technique and can be recognised easily within feature animation. 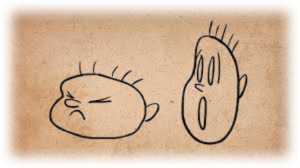 Anticipation which is a technique that prepares the audience for an action as demonstrated in the picture below. It can also be used in less physical situations for example closing the laptop screen to signal someone coming in. 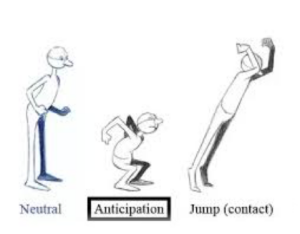 Staging, this principles purpose is to direct the audience’s attention to import parts of the scene/storyline. This can be done through a number of creative ways i.e. lighting, placement of the camera, shadows etc. As long creates an unmistakable direction that plays a party in the scene/story – its staging. 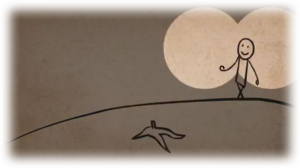 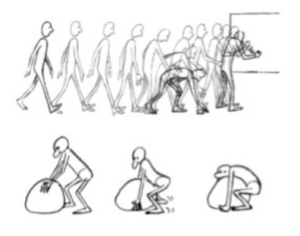 Follow through and overlapping action are techniques that help render movement more realistically through changing the timing of movement particular parts of each frame, i.e. with a running squirrel the legs move faster than the body or when their tail blows in the wind.

Slow in and slow out is the part of animation process got its name from the fact it takes longer to animate the start and end of each action. This is because with moving g objects more happens at the start/end which the animator has to capture. 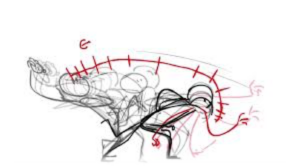 Arcs is the rule that for animation to look real actions must follow the most natural trajectory. For example, when you bounce a bouncy ball against a wall it will follow a sequence of natural arches before it bounces back to you. 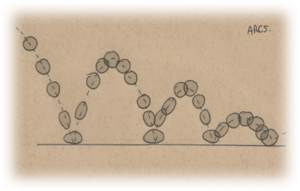 Secondary action is a guideline that says adding a secondary action where possible to a main action can add realism, character and emotion to your animation. 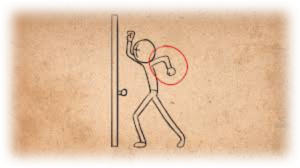 Timing is simply the number of frames in a given action, correct timing can create a realistic flow and illusion of gravity. Editing the timing of an object relates heavily with the emotion/mood you are trying to create.

Exaggeration is an effect that’s another favourite in feature animation. As the name suggests exaggeration takes ordinary emotions/actions and amplifies them in a way to highlights characteristics of the subjects in an engaging way.

Solid drawing is the principle of giving a forms volume and weight to create a three-dimensional model. Modern-day computer animators draw less because of the facilities computers give them, but just u8ndertanding this concept benefits them greatly when modelling. 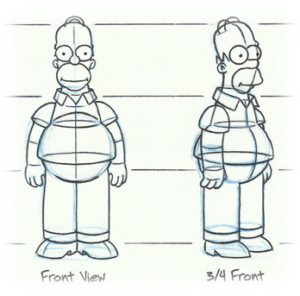 Appeal is the type of charisma a character hold. Whether they be a good, a baddy, or even the overly innocent one, it’s what makes the character interesting and likable (or not!). 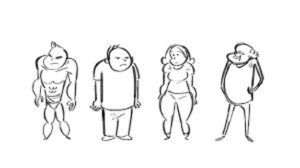 It’s a lot to take in – we know! But this venture into animation should help you work your way around the sector.

If you want to know more about skills are best for what sectors or have anything to add in general, we would love to hear from you. Start the conversation by reaching out to us – info@yellowcat.london